Imphal, 27 September 2020 (Evening News ) :  One person died and 23 were injured in a violent clash between two villages Aimol Chingnunghut and Aimol Khunyai under Machi Police station in Tengnoupal District regarding land dispute. Tengnoupal DC imposed curfew in both the villages to avoid further untoward incident. Impact News sources, the incident occurred around 4.30PM yesterday. The incident occurred when youths of Aimol Khunyai playing football on the controversial playground. Upon getting the news o conflict between the two villagers, Officers of Tengnoupal and Kakching District Police, top police officials and additional police forces rushed to the area and tamed the conflict. Police are still on strict vigil to avoid any unwanted incidents. The deceased in the incident is Pastor of Aimol Chingnunghut, Thangjalal son of Waneilal.

Imphal, 25 September 2020 ( Evening News ) : Newly appointed Minister Oinam Lukhoi has disclosed that an allied party of the BJP led Coalition Government might be ousted from partnership. He has added that out of the 4 members of the party, two have been already dropped and if the remaining two wish to withdrew their supports, they are most welcome. He added that the Government will be more than happy to have some empty space. O. Lukhoi was speaking to media on the occasion of his reception at Thongkhong Luxmi Bazar in Wangoi Constituency last evening. He also declared that he will recruit as many people as possible from Wangoi Constituency to various posts of various Government departments. Expressing pride that no person had become a Minister without being an MLA, O. Lukhoi proclaimed that more than 150 individuals of Wangoi Constituency have been recruited as Government employees as he supported the BJP Government despite winning the last Election on Congress ticket.  O. Lukhoi mentioned that he is ready to accept any portfolio and claimed to be the right hand of Chief Minister N. Biren. He also lauded those who had resigned from their MLA posts to save the Chief Minister. The Newly appointed Minister asserted that he trusted Chief Minister N. Biren enough to resign from his MLA post to work for the welfare of the State. He assured to make all out efforts to develop Wangoi Constituency.

Deputy CM Y. Joykumar says NPP's stand will be taken along with NPP National President Conrad Sangma upon his arrival

Imphal, 25 September 2020 (Evening News ) : Deputy Chief Minister Y. Joykumar has said that NPP will take their decision on whether to continue supporting the BJP led State Government only after NPP National President Conrad K. Sangma arrives in Manipur.  In a telephonic conversation with Impact news, Y. Joykumar said that they have not made any decisions yet. It may be mentioned that in the 2017 general election, BJP won only 21 seats out of the 60 seats and they took support from the NPP, NPF, LJP, Trinamool Congress and Independent MLAs to form the coalition government. But BJP has been empowered after some Congress MLAs recently joined the party.  NPP legislatures had recently withdrawn their support but joined back in support of the BJP led government after a reconciliation meet. However, out of the 4 NPP Ministers,  2 Ministers namely Health Minister L. Jayantakumar and Fishery Minister N. Kayisii were dropped out of the State Cabinet yesterday against their earlier agreement.

Imphal, 25 September 2020 (Evening News ) : Ex Minister Karam Shyam has said that Lok Janashakti Party will decide whether it will continue supporting the BJP led Coalition State government or not only after a meeting between (LJP) Central Leaders and Advisors of Langthabal Assembly Constituency. Karam Shyam said he has no grudge for being dropped from the Cabinet, however dropping him without any prior information is against the ethics of a Coalition government.  He said fate of the  2022 General Election will be clearly visible in the upcoming By-Election. Speaking to media at Chajing Mairenkhong Community Hall today, EX Minister Karam Shyam asserted that he had given his full support to strengthen the BJP led Coalition State Government right from the start. He added that he had never approached to give him a Ministerial post.  Karam Shyam assured that he will continue to work for the welfare of the public in his capacity as an MLA. He also said that party hopping without ethics for personal gains is the end of one’s political career. Minister Karam Shyam wished well to the newly appointed State cabinet ministers.

Thadou Inpi – General Headquarter in the name of Kangpokpi District condemned the dropping out of the lone woman Minister of Manipur Nemcha Kipgen of Kangpokpi Assembly seat in the recent Reshuffling of State Cabinet Reshuffle. Press release from Thadou Inpi – General Headquarter expressed discontentment against the BJP led State Government for the same.

Imphal, 22 September 2020 (Evening News ) : Police has arrested three miscreants involved in looting 1 crore and 15 lakh Rupees and murder of Arambam Ranjan Meitei on September 4 near SBI Main Branch Churachandpur. The arrested persons are 40 year old,  V.Thangkhanmaun, Son of late V.Tunkhokam from Munhoi village in Churchandpur District, 36 year old, K.Somen, Son of K Achouba from Khuga Tampak in Churachandpur District and 40 year old, Khongkham Brojen, Son of late K Sahen from Bamon Kampu, Imphal East District. All three of them are employees of Writers Safeguard Group. An amount of 20 lakh rupees, one point 32 revolver gun and some live bullets have also been recovered from them. Police interrogation revealed that mastermind of the incident is Khongkham Brojen and he gave his point 32 license revolver and 6 bullets to K.Somen and Thangkhanmaun to carry out the crime. It further revealed that they have swindled around 2 crore rupees meant for depositing in ATMs over the span of last 5 years.

After a long protest to deliver justice for late Arambam Ranjan, who was shot near SBI main branch Churachandpur on September 4, police has arrested the suspects. Furious locals stormed the residence of accused K. Somen, Son of K.Achouba at Khuga Tampak, Zoveng Churachandpur this morning. Police, CSO and JAC leaders tried to pacify the angry mob who tried to attack and demolish the accused person’s house and even tried to set the house on fire. Police along with JAC leaders have shifted the family to a safer place. Curfew has been imposed in the area. A meeting of the JAC and other civil societies are underway till the time of filling of this report. A press conference will be convened this afternoon after the joint meeting is over.

Imphal, 21 September 2020 (Evening News) : Bail Hearing of Md Faiz alias Mohamad who is the prime accused in the rape and death case of ‘Echal Thambou’ Mayang Imphal has been postponed to September 29. The hearing has been postponed since the Investigating Officer (IO) of the case, Additional SP Rattana Ngaseppam failed to submit the bail objection report for today’s hearing in the court of Judge RK Memi of the Special Judge POCSO, Imphal West. Prime accused Md Arish alias Maza Khan, Son of Md Sikandar Ali and Majida Begum and two other accused namely Md Salim and Md Faize alias Mohamad are under judicial remand. Agitators chanted various slogans in-front of the Cheirap Court against the bail hearing of Md Faiz alias Mohamad. Scuffles ensued as Officers of City Police tried to disperse the protestors. Police resorted to spraying tear gas to disperse the mob, but they remain unmoved at the Court Gate.

Imphal, 20 September 2020 (Evening News ) : Revenue Minister Karam Shyam has handed over land documents to 122 households of Rongmei Kabui Community who have been residing at Langthabal Khoupum for the past 200 years. Speaking at the event held at Langthabal Community Hall today, Minister Karam Shyam assured to provide land documents if a community inhabits a certain area for years and if it deems fit. He disclosed that efforts are underway to provide land documents to residents of Langthabal Chingkha and Chingthak soon. He added that as per Manipur Hill People's Regulation Act 1947 and Manipur Court’s Act 1947, villages in Sadar Hills have been paying House taxes since 1947. Later, from 1984 onwards the villages were under Imphal West Revenue. Stressing the importance of having land documents to acquire land ownership, Minister Karam Shyam appealed to extend co-operation to ensure Digitisation of land records in the hill areas. Responding to the memorandum submitted by the villagers on the occasion, Minister Karam Shyam assured to provide clean drinking water in the village. He also aasured that roads in Khoupum will be repaired under PMGSY without further delay. Revenue Commissioner R.K Dinesh and Joint Secretary of Revenue Department- Y. Rajen attended the event. 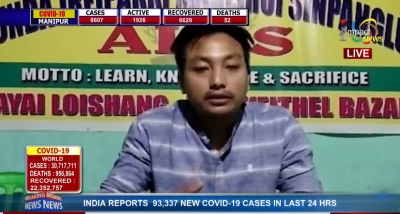 Imphal, 19 September 2020 (Evening News ) : President of Apunba Ireipakki Maheiroi Sinpanglup, AIMS, Kh. Romen has demanded the unconditional release of the 4 arrested members of AIMS within 24 hours. It maybe mentioned that Imphal West Commando team has arrested them for locking up the Engineering Wing of the Education Department yesterday against Government’s alleged failure to take actions against corrupt officials of the wing. Police arrested AIMS Finance Secretary Nickerson, Publicity Secretary Saiyonba and members Thonglen and Nonganlakpa from AIMS office in Kwakeithel last night. Speaking to media today, Romen alleged Chief Minister N. Biren of supporting corrupt top bureaucrats and of giving false assurance to the public of uprooting corruption in the State. He asserted that the Government’s failure to look into the misdeeds involved while coming up with the architectural drawings for the construction of Engineering Colleges of DM University and at Heirok by the Engineering Wing of the Education Department is a clear example of corrupt deeds. He maintained that people are losing their faith in the Government following such series of misconducts. Romen warned that AIMS will launch intense agitations if the arrested members were not released within the stipulated time.

NEET 2020 held all over the country; around 16 lakhs students registered for the medical entrance exam