Imphal, 07 May 2016 ( Evening News): The 42-hour public curfew called by Joint Committee on Inner Line Permit System - JCILPS hit life for the second day today. Almost all the areas in Imphal city and its neighbourhood wore a deserted look as people continued to remain indoors during the public curfew. All the major business establishments, markets including Khwairamband Keithel, Thangal bazar and Paona Bazar, educational institutes and private offices remained closed. All the inter-state public transport services were suspended even on the second day of the curfew today. There is no report of untoward incidents till the filing of this report. The curfew will end at 6pm today. JCILPS yesterday had asked the people to form human chains and shout slogan demanding ILPS from 5pm to 6 pm today. It may be mentioned that JCILPS imposed public curfew from the midnight of May 5 demanding conversion of the 3 bills passed by the State Legislative Assembly to an Act.

JCILPS to form human chains from 5pm to 6pm tomorrow

Imphal, 06 May 2016 ( Evening News ) : JCILPS Convenor Khomdram Ratan has said the success of the public curfew shows that people are united in saving the indigenous people. Speaking to media persons he asked the people to form human chains from 5pm to 6pm tomorrow and shout slogans to save the indigenous people. He also appealed to the protestors not to obstruct media persons, hospital staff, electricity and water supply staffs, medical emergencies and events related to religion. Reacting against the statement made by newly appointed BJP Manipur Pradesh President that he is clueless about the issue, Ratan said the state BJP has a big responsibility on the ILP issue as there is BJP government in the centre. He thanked those political parties which are supporting the ILP issue.

Meanwhile, JCILPS women’s wing resolved to launch agitations. Speaking to media persons JCILPS Women's Wing convenor Thongam ongbi Apabi said meira rallies will be organised on the 8th of this month at 7pm and appealed to the people to take part in the rallies. 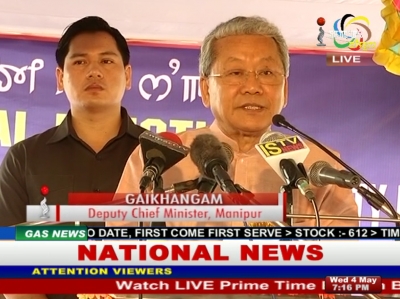 Imphal,  05 May 2016 : Deputy chief minister Gaikhangam has categorically stated that it would more fruitful if all join together to put pressure on the centre regarding the three bills passed by the state assembly. The deputy chief minister felt that all will suffer if the JCILPS called for bandhs and blockades to press the demand for implementation of Inner Line Permit System in the state. Responding to query by media persons on the sidelines of the inaugural function of a community hall at Irom Meijrao,  Gaikhangam said the three bills passed by the state assembly have already been sent by the governor to the president of India seeking his assent. He also emphasised the role of the BJP govt at the centre in converting the bills to an act. On the JCILPS ban on contest and voting by non-Manipuris in the Imphal municipal corporation election, Gaikhangam said every responsible person needs to understand the laws of the land.

Imphal, 04 May 2016  : Joint Committee on Inner Line Permit System (JCILPS) has announced 42 hour public curfew to press its demand to convert the 3 bills passed by the Manipur state assembly to act. The public curfew will begin from the midnight of May 5 and end at 6 pm of May 7. JCILPS Convenor, Khomdram Ratan made the announcement at a prees meet at the CILPS office at Sega Road, Thouda Bhabok Leikai this afternoon. He said the decision to call for the public curfew was taken at the public meeting held yesterday at Manipur Dramatic Union Hall at Yaiskul police lane. He demanded that the political parties in the state must announce their stand on the conversion of the 3 bills to an act. He also demanded that they must announce their stand on the non locals standing or voting in the coming Imphal Municipal corporation elections by the 8th of this month.9 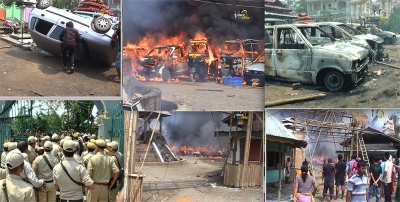 Shops down shutters in Paona Bazar over police drive against shops without lighting outside, police assaults 2 persons during the drive

Imphal, 29 April 2016 : Shopkeepers in Paona bazar today closed their shops protesting against the police drive. Shopkeepers are protesting the assault of 2 salesmen and alleged forced closure of shops by Imphal Police personnel. The personnel allegedly closed the shops for not having lights outside their respective shops. Following the protest, Sagolband MLA R.K Imo rushed to the Paona Bazar and intervened in the matter. He spoke to the  agitating shopkeepers. MLA Imo gave assurance to the agitating shopkeepers that street lamps will be installed within 10-15 days. A team of police personnel led by Imphal West Commando OC Thungampou allegedly picked up a shopkeeper identified as Ajay Kar from Thangal Bazar who runs a shop at Paona Bazar for complaining to the MLA. Shopkeeper Ajay Kar had allegedly complained to the MLA that two salesman were physically assaulted by the team of commandos. Following the incident angry shopkeepers closed all the shops. The two assaulted salesmen are identified as Haobam Thoi from Sanjenbam and Amir from Kshetrigao.

9 people reported to be hospitalised at RIMS

Imphal, 14 April ( Morning) 2016 : At least 9 people reported to be hospitalised at RIMS following the earthquake. Some damages reported from BSNL and LIC offices; One BSNL staff injured during evacuation.

New Delhi, 14 ( Morning) April 2016 : Prime Minister Narendra Modi today spoke to Chief Ministers of Manipur, Assam, and Nagaland after an earthquake struck these states."PM @narendramodi spoke to CMs of Assam & Manipur regarding the earthquake in the region," said a tweet by the Prime Ministers' Office."PM @narendramodi spoke to the CM of Nagaland regarding the earthquake in the region," said another tweet later.An earthquake measuring 6.9 on the Richter scale shook the northeast, several parts of West Bengal, Bihar, Jharkhand and even Delhi and NCR.There was no immediate report of any casualty or major damage.In Guwahati, some people reported cracks in buildings while there was power outage for some time in Shillong. Tremors were also felt in the northeastern states of Mizoram and Nagaland.All the northeastern states are categorised under zone 5 in the country's seismological map and are considered highly vulnerable.

34 including 5 police personnel injured in the Mayang Imphal violence

3 persons including a police personnel injured in Mayang Imphal

2013 - Powered by Beautiful-Templates.com. All Rights Reserved.