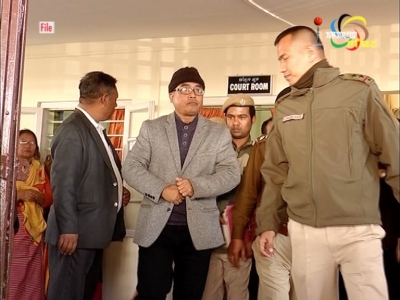 Imphal, 06 March 2017 ( Evening News ) : High Court of Manipur has declared United Naga Council’s ongoing economic blockade as illegal. The declaration was made on march 3 by a full bench of Manipur High Court comprising of Chief Justice R.R. Prasad, N. Kotiswar  and Kh. Nobin. The Court also gave direction to the State government’s District Magistrates  to take up strong measures on National Highways 2 and 37 at GOC-57 Mountain Division like imposition of  144 curfews under Cr.PC when large group of people gather as well as to ensure passage of minimum 15-20 convoys in a month in order to facilitate convenient passage of goods vehicles. It maybe mentioned that Manipur High Court has been handling the case of UNC’s Economic blockade since the past 3 month. Manipur High Court has also given direction to the Central Government to send in better 72 Security Company to guard the National Highways. The Court maintained UNC’s imposition of Economic Blockade to satisfy their political wish at the cost of miseries of the people has never been in the interest of the State but has caused hindrances to the State’s developmental works and progress. It says UNC’s Economic Blockade is declared  illegal under Supreme Court’s decision