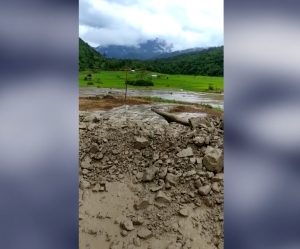 Heavy mudslide at Twilang area in Kangpokpi district has brought immense plights to the local residents. Tujang Waichong and Selsi village areas in the district have been severely affected.

Approximately 30 hectares of land including paddy fields have been submerged under the mudslide. The devastating mudslide occurred around 3.30 AM yesterday. It streches from Lamlenkon, Tujang Vaichong of Selsi village along the Imphal-Tamenglong road.

Imphal East District Police has arrested a man hailing from Bihar along with 441 bottles of Remdesivir, a medicine used for COVID-19 treatment. It maybe mentioned that the Centre has already put a ban on export of the medicine without necessary approval from the relevant authority.

SP N. Herojit said that the arrested man is now in the custody of Porompat Police Station for further actions. During the preliminary interrogation, Lalu disclosed the name of another person from Guwahati suspected to be behind fake drugs business. The SP added that State Police Department is putting all out efforts to nab other miscreants involved transporting the medicine from Guwahati to Imphal. He also appealed to the public to aware of such racket.

2013 - Powered by Beautiful-Templates.com. All Rights Reserved.